As bioinformatics grows up into a modern scientific discipline, the rules are being developed alongside its newest tools.  The scientific smackdown that arose from discovery of the collagen-like protein from preserved T-Rex protein only illustrates these developments.

To make matters worse, simple bioinformatics tools are already becoming outdated.  Instead of examining a few simple lines of As, T, Cs and Gs, scientists are more interested in seeing how these letters interact with each other in the diversity of cells across many living organisms.  For instance, some scientists are interested in gene regulatory networks, which can be thought of as “interlinked sets of genes that are regulated in a coordinated fashion in cells and tissues” (-PZ Myers, Pharyngula)

To understand the future and present of bioinformatics, our students must be savvy to navigate through the available (and free) tools that can augment their science education. 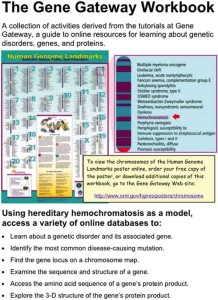 Bioinformatics Tools from the NCBI

Going Further: BLAST Activity with Insulin
Investigate the Insulin protein and the mutations which cause disease. This activity is an introduction to using and interpreting the Blast database. Inquiry extensions involve comparing human insulin to insulin in other species.  (From K12 Outreach – Fungal Genomics)